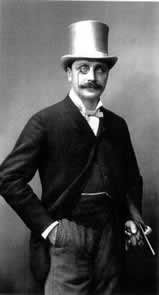 The history of the top hat is somewhat interesting. According to one story, the high silk hat was invented in Canton in about 1775, by a Chinese hatter for a Frenchman who carried his headpiece back to Paris. Another is that the silk hat was invented in 1760 in Florence. But a more likely story, is that the first silk top hat in England, was accredited to a hatter by the name of George Dunnage, who resided in Middlesex in 1793.

In the 18th century beaver felt was still preferred for the highest quality hats, but mixtures of beaver and wool, or wool and rabbit were used for the cheaper products, as they still are today.

The process by which the hatter's apprentice had to master can be summarised briefly here:

The coarse guard hairs were plucked from the beaver pelt, which was then brushed with a solution of nitrate of mercury to raise the scales on the fur shafts, so that they would lock together firmly, a process known as carotting. If carried out in a poorly ventilated room, the mercury fumes could damage the brain, hence the expression,"as mad as a hatter."

In 1797, John Hetherington, a haberdasher in Charing Cross, was described by The Times, as appearing in the Strand in what Hetherington called, "a silk hat," a tall structure having a shiny lustre and calculated to frighten timid people. Silk plush thus appeared at almost the same moment as the silk top hat and although the two were to become inseparable, in the latter 19th century the silk top hat was slow to be accepted. The final depletion of the American beaver in the mid 19th century ushered in the reign of the silk top hat.

The shiny lustre of hatters plush had to be maintained by regular brushing with a velvet pad and some sharp dressers in the Edwardian era used to call in at their hatter's daily to have their silk top hats ironed.

Other technical developments were taking place in the hatters craft in the first half of the 19th century. The scientific approach to fit, which was a feature of men's tailoring in this century was also being applied to hats.

From 1817, they were made on an oval block, whereas previously they had been made circular and shaped to the wearers head by using a hat screw.